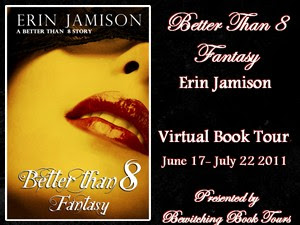 Welcome to my leg of The Book Blog Tour for "Better Than 8: Fantasy" By Erin Jamison. Book Review:

Better Than 8: Fantasy is an exploration into sensuality, a sexual fantasy that explores the very human side of the character Amara and her emotional and physical needs.

Amara has been hurt, emotionally devastated by a man she thought loved her, as she loved him.

She feels used, her self esteem is at an all time low, her successful real estate business fill her hours and her lonely nights.

Author Erin Jameson touches on the relationships that Amara has with her girl buddies, the closeness and the shared laughter and trust they invest in each other will ring true for most of the readers. She has them, and they provide her with friendship and comic relief.

The woman are as different from each other as it’s possible to be. Like the real world, these characterizations are warmly etched, each of the women…Nikki, Charlie, Stacey and Nessa, bring something unique to their friendship.

When her dear friend Charlene aka Charlie…suggests that Amara join an online dating site with a difference, Amara is curious, although feeling more than a little foolish she joins. The site is of course the “Better Than 8” of the title, no prizes for guessing what the “Better Than 8” stands for! That’s right. Better Than 8 is for men to connect to women on the site who are unafraid to express their need for a well endowed male. Simple, not really. Amara doesn’t expect to connect to anyone. When she receives a response from a man known as Seva she anticipates no more than a casual flirtation online.

Over a period of months they communicate every day, often several times a day. They share laughter, likes, dislikes..their humor is compatible … all in all a lovely relationship that they both seem determined to continue.

Overnight, something changes. Amara stops receiving messages from Seva. Completely, nothing, not a word. He disappears from the site, and Amara feels like a total fool. She says nothing to her female friends, holding the hurt inside and determined to never again allow herself to be made a fool of.

Her thriving real estate business stands to make or lose a lot of money: everything hinges on Amara travelling to Puerto Rico and unraveling the complicated holdups on a large purchase being handled by her company.

Puerto Ricco…that is where Seva lives.

The businessman she meets up with invites her to an important meeting, Amara walks in and freezes as she comes face to face with the devastatingly attractive Seva himself.

What follows is a journey into sensuality. Beautifully written scenes of passion and exchange of highly charged emotions.

The arrival of Naldo on the scene the next morning could unhinge everything. Naldo is Seva’s housemate…but that’s not all he is.

I will not spoil the remainder of the book for you, let’s just say that some fantasy’s are well drawn and some are not. This one is done extremely well. Hot enough to make you smile.

And now please join me as I chat with the Author Erin Jamison...

In an effort to get to know you a little before this interview I read all your blog posts, I like to research the author before formulating the questions. I came across the following quote on your blog and I was delighted.

Your driving force is one that some authors lose sight of…do you believe that the LOVE of writing shines through in a novel?

Yes I do. I think it comes thru in the way the characters and the world that they live in is shaped and described. In order to convey the world characters live in and give the characters a sense of personality that comes to life off the page means that the author spent time with those characters. Every author hopes to find an audience and have success but what I live for is the feedback that says, "It was a great story...or the characters were so real." It means I was able to write a story that made a connection and that is pretty great.

We all experience writer’s block at some point, is yours a state of mind to be overcome or is it perhaps someone you rely on for honest feedback? How do you overcome it?

To tell you the truth, I can get very mired in minutae. I know I'm actively writing it and it can be changed and very likely I'm going to change it. However, if I'm not sure of how to start it or what it looks like in my head, that is often times where I get stuck. Take for instance the instant message conversation that plays out between Amara and Seva. I knew that it would be sexy but I wasn't sure how to start it. I knew that it wouldn't be sexy off the bat but I wasn't sure what they would say to each other. I put that chapter on hold and wrote out other chapters, thinking all the while about what the story needed from that IM yet pacing it for a first time conversation as well.

The excitement of launching your first novel is a marvelous, terrifying, gut-wrenching experience, share with my readers just how you feel right now?

Oh me, oh my. Well, I followed a lot of advice. I started promoting while I was writing so I felt an obligation to meet deadlines I had set. I met those deadlines and got out advanced review copies however when it came time to actually put the book up....LIVE...for the whole world to see..I started sweating. I started questioning myself. Just because I got a few people to say that they liked the story, did that really mean I would find an audience? What if people didn't like it? What if I put it out there in the ether ... and no one sees it? What if what I thought women would relate to...offended people instead of intriguing them? I have to say that yes, I've made mistakes. Its my first time out; I should let myself off the hook for making some mistakes. All of my reviews have been pretty good and it does relate to the audience I intended the book for - women. I'm an unknown author and people will find me as I produce more work so its all fine but definitely scary initially.

Actually no. What inspired me to write erotica is that I'm a fan. It's what I read and what I like. I considered myself the fan I was trying to attract. So that was the first thing. The second thing that inspired me was that I thought I could make it funny yet intriguing. I figured I could give it a shot.

Are you a plotter or a panster?

I'm a bit of both I'm afraid. I will just have an idea and from that idea comes pieces of dialogue and usually a rough title. That would be added to my work in progress pile. When I seriously sit down to write however, I outline it so that I know where I'm going in the story. I have tried to just write it as it comes and I find I get lost 'cause I have no idea where to go with the story. Outlines definitely help me.

Do you schedule writing time and stick to it or do you write when you simply must because your muse is screaming at you?

I do a lot of planning in my head first. I write whenever I have time really. I have limited time between working, promoting, being a mother, and trying to write. So I write while I'm at the hair dresser sitting under the dryer. I write while I'm at a doctor's appointment or in the pharmacy waiting on a prescription. I write bleary eyed at night when the house is quiet. I fit it in when I can.

How long did it take you to complete ‘Better Than 8: Fantasy” from word 1 to final draft?

I started writing January 20th and had the final draft by mid May.

What do you have coming up next?

What other genres do you love to write?

I have some paranormal romance stories I'm working on but for the most, its all romance for me.

Where would you like to see yourself as an author 12 months from now?

In Puerto Rico with a Pina Colada with a hot man on my arm. No kidding. I hope that I will be writing full time but if not, at least consistently putting out stories for women that represent strong women.

June 18 review and interview at

June 19 Interview Back of the Book Reviews

June 22 Guest Blog at The Write at Home Mom

Words of Wisdom from The Scarf Princess

July 11 Review My Need to Read