Topic: "Censorship In Literature, should it be imposed upon us; or self imposed?" My guest Author, Kimberley Menozzi. 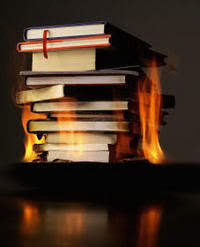 For many writers, the first form of censorship they encounter is often this proclamation. Whether spoken by a parent, a teacher or a peer, whether meant in earnest or in jest, these four words have probably stifled more young (in experience, not age) writers than any others.

Whether meant in disbelief: "An epic novel about love set against the backdrop of chartered accountancy? You can't write that."

Or meant as prohibition: "An exposé on lunchroom sanitary conditions? You can't write that."

Or in fear: "Your books are erotica? Aunt Gertrude will never let us live it down. You can't write that!"

These four words have the power to sink deep into a writer's psyche and lurk there, waiting for the exact worst moment to emerge and shame or frighten a writer away from following their gut instinct, or the flow of the story, or the exploration of the characters.
Years ago, while writing a novel, I shared the finished product with friends and colleagues and got their opinions on it. They all -- to the last one -- loved the story. They loved the characters, they loved the plot, they loved the settings. In short, they loved everything about it.

Then I shared it with one more friend. He didn't read it; instead, he asked me to tell him the story, point by point. I did.

One scene involved an eight-year-old boy being kissed in a rather mature way by his eleven-year-old cousin. When his uncle -- her father, of course -- catches them, accusations fly about the nature of that kiss. Another scene involved a couple of twelve-year-olds (that same boy, now older, and a girl) who are very close friends. The friendship comes to a point of sexual exploration with one another -- nothing too graphic, no actual sexual intercourse -- and that's when my friend stopped me.

"He was only eight?" asked my friend. "He's only eight and she's kissing him like he's older?"

"And the older ones? They're pre-teens?"

"And they're...what? Feeling each other up?"

"And do they ever have sex?"

"When they're older. Fifteen or sixteen."

"Well, they're underage. That's illegal. You'll get in trouble, you know?"

"But they're both the same age."

And that's when he added those four little words: "You can't write that."

I scoffed and ignored him, but the seed was planted. That story remains on my shelf. I take it down from time to time and go over it, aware there are much more graphic tales out there than this, much more disturbing stories, but I still haven't sat down to rework it into saleable shape.

Worse still, now, whenever I come to a certain point with any scene which might be a tad controversial, I hear his voice. I hear those words.

It slows me down, but it doesn't stop me. I can't let it stop me -- I can't censor myself, I think, knowing full well that I will whether I mean to or not.

I think just about every writer deals with self-censorship to some degree. It can be a conscious thing where one thinks: I won't write about this because I find it offensive, or The repercussions for writing this are more than I can deal with right now, or There's too great a chance for misrepresentation or misunderstanding if I write this in this way or This is hitting too close to home…for me.

It can be an unconscious thing, where we think we aren't "able" to write in a certain genre even though we love reading it, or in the way we categorize our own work.

When my novel Ask Me if I'm Happy came out, I had no qualms in sharing it with family and friends. There was nothing in it which I feared them reading, nothing which I felt was embarrassing in any context.

The release of my novella, Alternate Rialto, however… Well, that was a little different. That story, although tied to a few of the characters from Ask Me…, was a bit spicier, a bit sexier in spite of the fact it was a shorter read. My biggest concern? My family members -- particularly the ones who had been shocked and upset by Janet Jackson's "wardrobe malfunction" at the Super Bowl a few years ago, or the ones who don't like nude statues because they're "too revealing" for their taste. How would they respond to seeing the events in Alternate Rialto unfold?

I shied away from sharing that book with them for a while. Nothing had stopped me from writing it, or from sending it to my editor and then to my publisher. Nothing made me nervous about sharing the book with countless strangers in the world. But I was a bit anxious about those nearest to me reading it and what they might think as a result.

So when I had the chance to meet with one of my cousins and she asked about the book, I told her about it. My mother was there with me, and, knowing my concerns, she took it upon herself to broach the subject of the "spicy" nature of the story.

"It has a lot more sex in it than the other one did," said my mother.

"Oh, nooo…" my cousin said in response, full both of sarcasm and of teasing. Of course she wanted a copy, and I sold it to her, happily.
And with a little less worry of what anyone else might think.

When I think of the other stories I want to tell, of the places where they go -- not all of them within my own comfort zone, much less anyone else's -- I am heartened by my cousin's response. In fact, the weight of self-censorship lifts from my shoulders a bit more at the thought.

I know not everything I write is going to be "acceptable" to others. Some of it is going to be downright objectionable, in fact. For the moment, though, the biggest obstacle I have to overcome is that troubling voice in the back of my mind, that voice which no longer belongs to a well-intentioned friend, but to myself.

You can't write that.

Just watch me.
Posted by Soooz Burke at 6:45 AM