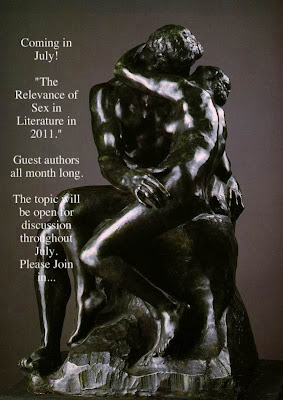 The Relevance of Sex in Literature in 2011

Before I start into this article, I want you to think about a few questions.

· Do you remember the first book you read with sex in it?

· How did it make you feel physically?

· What sorts of emotions did the sex scenes evoke?

Don’t answer them straight away, just mull them over, let them percolate in your mind and we’ll come back to them later.

As a Teacher, I have to shoulder the burden of teaching Sex Ed. In the UK, most schools amalgamate the subject into PSE (Personal and Social Education) and often it’s skipped over with only a couple of lessons wholly devoted to Sex Ed. In some schools, like many faith schools, sex is only taught as part of the reproductive cycle in Science.

Don’t get me wrong, there are schools that take it seriously and have a separate class for it. These good schools are often oversubscribed…

Therefore, when the teenage pregnancy rate grows, Teachers get a lot of the flack for not teaching the subject properly. Now, you can breathe easily, I’m not going to rant about how teachers are undervalued and underpaid, etc. etc. etc… I just wanted to give you a flavour of how Sex Ed is seen in schools.

Some kids learn about sex from magazines, others watch TV shows or movies that include it as part of the storyline and still others manage to get access to inappropriate sites on the internet. The information that they learn filters down through the grapevine of school and socialising, spawning the usual misinformation and rumours that fills many schoolteacher’s hearts with Lead when they start the Sex Ed lessons.

I’m not just a Teacher though. I am a parent with two young children. The oldest, my son, is ten (almost eleven) and he is obviously starting puberty. He is also trying very hard not to notice girls and is starting to become curious about Sex, which is one of the reason’s I decided to take this particular slant on the title subject.

I know that many parents are squeamish about talking about Sex with their children. I know it fills me with a certain sense of dread when I think about doing it. However, I am a firm believer in the theory that a lot of nonsense and misinformation can be averted through having a good “Birds & Bees” talk with my children when they get to that age. It also builds a good relationship with your children when you do this, so they won’t be worried about asking you questions on difficult subjects.

The problem about not taking this kind of view is that if you don’t talk to your children about Sex, they’ll get more of their information from unsuitable sources.

What am I going on about?

Now you and I (as adults) know that Sex is more than that. However, remind yourself of your teenage years for a moment. Close your eyes and take yourself back to that point in time before you lost your virginity…

Stop sniggering at the back there and behave yourselves!

If you were anything like me, you didn’t know what Sex was about. In my school, we didn’t have Sex Ed. Classes and anything that was even rumoured to have sex in was a banned substance. So there was a lot of mystery surrounding the subject.

It also meant that when you managed to get your hands on something that did have sex in, you held on to it.

Just to clarify for those who are reading this and may be younger than I… We did not have the INTERNET. We only had VHS and CD’s had only just been invented when I hit Middle School.

Girls however, were supposed to be sweet and innocent. We were not supposed to be interested in Sex at all, until we met the right man and got married. Then it was up to our husbands to teach us…

Hah! In practise, that view meant we girls often had to look elsewhere for information. Girls magazines at the time were kept sweet and innocent. The raciest it got between the pages of Jackie was agony aunts answering questions about kissing and periods. If you were allowed to buy Just Seventeen, there may have been photo stories about heavy petting… I don’t know if there were, by the way, I was buying Top of the Pops at that point.

Many girls would borrow their mum’s Jilly Cooper, Catherine Cookson or Danielle Steel books and thumb through those, making sure they weren’t caught reading them.

Then came Judy Blume and the Children’s Book world was turned upside down. Finally, girls had somewhere to turn to, to find out about sex. Moreover, it was legal and you didn’t have to hide it from your mum. Well, until there was a mass up roar about it in Parentland and a lot of the County Libraries and School Libraries were forced to withdraw her books from their shelves.

Why? Well this excerpt from a Wikipedia Article on the book explains why -

The book is often cited as controversial because of Blume's use of suggestive language, the detailed depiction of sexual intercourse, and because her character Katherine goes on the pill. Criticism of the novel often comes from sexual abstinence groups, as well as religious groups who consider the use of 'the pill' unsuitable for Blume's teenage audience.

Katherine and Michael discuss their feelings carefully before deciding to have sex; when they finally have it, they talk about it thoroughly and obtain contraception from a family planning clinic.

"Judy Blume, an author of books for young readers, caused a scandal in 1975 with Forever... (1975), which is commonly considered the first YA book to deal with teen love and teen pregnancy. Although Bradbury Press infuriated Blume by advertising the book as Blume's first adult book, Forever... is a Young Adult novel; it soon made its way into the teen audience, and is now being read by some preteens. ”

Judy Blume considers this book to have had one "odd and lasting side-effect of its popularity"; the decline in the popularity of the name Ralph. Throughout the book, Michael consistently refers to his penis as "Ralph", and the subsequent generation who grew up reading Forever seemed unwilling to consider it as a suitable name for their children. Blume responded to several concerned Ralphs with "I apologize to all of them. It's nothing personal."

My first exposure to sex in a book was a copy of Skinhead by Richard Allen. I borrowed it from my mum when I was thirteen. The MC was male and it was set in the late sixties / early seventies, so it wasn’t the best of introductions to sex for a girl.

AGGRO - That’s what Joe Hawkins and his mates were looking for, with their shaven heads, big boots and braces. Football matches, pub brawls, open-air pop concerts, hippies and Hell’s Angels all gave them chances to vent their sadistic violence. SKINHEAD is a story straight from today’s headlines - portraying with horrifying vividness all the terror and brutality that has become the trademark of these vicious teenage malcontents

The scenes were crude and in some cases violent and for a while, it put me right off the idea of letting a man touch me like that. It made me feel sick, but strangely tingly in various places that I didn’t know could tingle.

It fascinated me and I took it into school to show my friends. I narrowly missed getting a detention, when a teacher came into the library and spotted us reading it.

Thankfully, it was one of my younger, more broadminded teachers and he told me to put it away. I was that embarrassed at being caught by my teacher that I never read it again.

A couple of years later, a friend gave my mum a large box of books. They were mostly Mills & Boon type romances and as I was fifteen, mum said I could read them. I’d been reading James Michener and Robert Heinlein at school, so I knew what a good book should read like, but the M&B ones made me laugh; the language was so over the top!

Shall I get to my point now? Why yes, I think I shall…

And this is where Sex in Literature can actually help our children.

Think about all that.

Now think. Where would you rather our young people learned about one of the joys of being an adult?

There should be picture books about the differences between boys and girls for the younger children.

There need to be books that explain the emotions that come with puberty in a gentle, yet informative way.

Sensitively written YA books highlighting the joys and the dangers of sex should be on our School Library bookshelves. Not just books about the mechanics of reproduction.

All of these things need to be addressed in our literature.

Well, because our children and our grandchildren, and their children deserve to learn about growing up in a way that isn’t going to scar their emotional and mental development.

So that they grow up as well rounded adults that enjoy the pleasure that Sex can bring, without the hang ups and the fears caused by the mishandling of those delicate issues.

If children can turn to literature and parents can answer the questions raised by turning to a book, then it has to be better than the children misinforming themselves through other means.

It would also make the Teacher’s working life a lot easier – they can study the books in class, give them out as reading projects without being scared that they are going to be censured for it.

What do you think?

Please join in the discussion with my guest, ask questions and offer your thoughts in the comment section below.