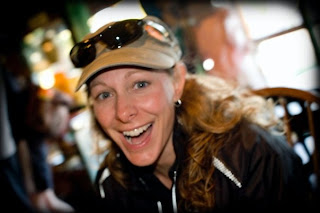 Introducing Kelly Byrne...remember the name folks...as a reader I am certain you will hear a great deal more from the Author.
As an author myself...the goose bumps tell me "Chasing Kate" is a headed for big things.
As an interviewer...I need chocolate, fast. She is an absolute delight.
A brief bio...
Kelly Byrne's writing background spans several genres including poetry, playwriting and television script writing.
Most recently I was head writer and producer for a children’s cable show called, “Aggie’s World” in Los Angeles. I’ve had several poems published in The Poet’s Page, The Great Lake Review, and The Pendulum and have also received numerous playwriting honors including the Yembrick Excellence in Playwriting Award for my play “Brain Babies.”
The play was also chosen for WordBridge, a writer’s forum with direct ties to The Sundance Film Institute and was one of the four finalists chosen in the 20th Century Playwright’s Festival in New York City. I’ve also produced and directed two plays I was commissioned to write for a venue in Washington D.C.

After having experiences in these other genres trying to see what suits me and my writing best, I’ve definitely found my home in the novel. Chasing Kate is my first novel, but there will be more.

I spend my free time reading, writing and playing with my furry munchkin, Lucy. AKA - The Goon.

I've also been known to have way too much fun on two wheels.

This is Kelly Byrne's First Interview. I am certain it will not be her last.

1.When did you know beyond any doubt that you wanted to be a writer?


I used to collect pens when I was little. I’d keep them in jars or walk around holding them, prized possessions. The chatter of crinkling tissue paper makes my soul sing. Don’t get me started on brass fasteners.

Wait? What was the question?

Shoot. I’ve derailed this interview straight off the line. I still collect pens. I suppose I’m just nostalgic for the way things used to be.

Writer. Yes, sorry. Back on track. I started writing a poem a day in 9th grade, but it wasn’t until college when I wrote my first play: “Nurse I Think My Appetite Has Returned, May I Have Some Soup Please?” that I fully realized my calling. That play was a masterpiece. Never seen the light of day and God willing, never will.

2. What inspired you to write “Chasing Kate”?

A friend of mine said something brilliant to me one day after lunch – he said “they should prosecute people for inner child abuse” and I just thought that was one of the funniest and at the same time most poignant things I’d ever heard. That notion ties in to the unique bond between Kate and Sadie in the story and that mix of humor and devastation is the balance I tried to strike in the novel. I want you to laugh at Kate’s craziness, and at the same time be touched – hell, cry, bawl your damn eyes out – about what’s going on with her and Sadie and the injustices in both of their lives.

3.How long did it take you to complete the first draft?

Well, not including the two or three months I stalled and nearly hurled it into the sea after I wrote the first chapter – eight months of fairly solid writing produced the bloated first draft. Then came the rewrites, thank God.

4. The character of Kate is a delight. Is she based on your own perceptions of life?

Thank you. I’m glad you enjoy Kate. She was good company for those eight months and beyond.

She’s a mixture of many, an amalgam of a few slightly unhinged friends I’ve had over the years and yes, perhaps a little of my own world view and experience has been inserted into her synapses here and there. I won’t divulge where or which shenanigans are part of my own repertoire of howlers. It’s always fun to let the reader wonder if the crazy things she’s up to are based in reality or not. I’ll never tell.

5. Did you have support from friends/family when you began the book?

I did. My boyfriend at the time was a writer as well and he really pulled me through the whole process. Kept me going. As did one of my best girlfriends. Sometimes all you need is encouragement. Well, that and a lot of chocolate.

6. Chocolate is an necessity, understood.  Do you follow a set process in your writing day?

First I stand on my head for ten minutes. Clears the cobwebs. I do three and a quarter jumping jacks followed by a brisk jog over the furniture. Then I sip green tea through a straw while bouncing on my belly bouncy ball trying not to choke. Sharpens the senses.

No. I don’t have a set process. The closest thing to a ritual I have is, well, chocolate. Always have chocolate handy. God I sound like broken record. Pardon the cliché.

I do enjoy listening to Enya on headphones while I write. She’s good white noise and the headphones help block the rest of the world out so I can climb into the one I’m creating.

7. How many hours a day{when not eating chocolate} do you have to focus purely on writing?

Eek. I would be lying if I said I didn’t have some time. But the carpet needs feeding. And the dog needs vacuuming. And the bed needs to be slept in. And oh, what a pretty weed outside my window, I think I’ll go watch it grow.

Sorry, what was the question?

8. {Chocolate break} Did your friends/family take you seriously when you began this work?

Do they take me seriously now that it’s done?

I do. She’s been great, but it’s a tough time right now in the publishing world. In the world world. We’ve gone out to a bunch of editors over the last two years and have received some lovely and complimentary rejection letters in return. That’s why I’ve taken things into my own hands with the marketing and publicity of the manuscript on Facebook and Authonomy and beyond. I’m hoping it will lead to a publishing contract.

10. The marketing of ‘Chasing Kate’ has been well done so far, is that all your work?

Thank you. Indeed it is, with some helpful input from my very intelligent and savvy boyfriend. I figured I should start now, become familiar with the process before the book is published, since the onus will be on me to publicize after it’s published. I so wish things didn’t work that way now, because it’s practically a full time job just getting it out there but it must be done, so I do it.

Right now I’m trying to drum up attention – “LIKES” on my Facebook Chasing Kate book page to show any interested editor that the book would have a readership if it were published. It’s a slow process. Not exactly going viral. But I’ll keep spreading the word by posting excerpts from the book daily and sharing the video about the book that I made on Xtranormal. That was a lot of fun actually.

11. What audience is ‘Chasing Kate’ aimed at?

Well, it’s funny, because I suppose it’s geared toward women over 16 or so, with two female main characters. But all the men who have read it have loved it.

A 70 year-old astrophysicist reviewed it on a novel critique site called NovelPro once (mind, these are chapter by chapter, nitty gritty down and dirty critiques) and he raved about it. Not exactly my target demographic. That’s why I believe Kate may appeal to just about everyone.

12. What else do you have in the pipeline?

Trying to stay sane at my day job, which is really a night job. It’s not working. I’m also considering, in a very serious manner, going back to school and getting my MFA in creative writing.

Aside from that, I’ve written about 100 pages of “Talulah Lies”, my next novel. The short blurb: “Thirty-five year old Emma Bloom meets her mother for the first time after her father’s funeral; the mother who is supposed to be dead. Emma’s got some questions.”

Thank you so much for taking the time to learn more about Kate and me. It was an honor to be interviewed. This was my first.

Kelly it was my very real pleasure. You are a delight to know. I may now have a chocolate Martini.