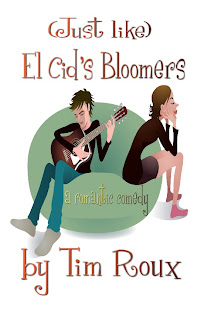 Cover:
Amazon blurb:
Jake Pembleton is a singer-songwriter who once killed a man, which still plays on his conscience. Now he is in real trouble. Ever since returning home to his wife and kids to find his suitcases parked outside his front door, Jake has been holed up in that wild and lawless part of his city known as ‘The Avenues’ with a springy nineteen year old groupie who is so sexy that she nearly gives him a heart attack each time she steps out of the shower.
Jake’s only hopes are that his wife’s new boyfriend will keep her sane, and that he will never meet his suburbia-dwelling parents-in-law again.
Beyond that, he just sits there clutching his guitar, writing his songs, loving his girl, and praying for better days and relief from a day job he is too ashamed of to talk about.
About the Author:
Born near Hull in the UK in 1954, Tim Roux was called to the Bar as a lawyer before working for over 20 years in business strategy and strategic brand marketing for a major multinational corporation. He has written ten books and this is his first romantic comedy.

My Review:
“{Just like} El Cid’s Bloomers” caught me unprepared, I guess I was expecting something different..what I am not sure, having read other works by this author I should have known better than to have any expectations of any kind other than knowing I was in for a treat.
Author Tim Roux didn’t disappoint me, this book is a fast paced and quirky glimpse into the world of music, love and life in Hull.
Don’t go looking for “sex drugs and rock and roll” This book is far too good to be lumped in a genre like that.
The world of Jake Pembleton revolves around Hull. It is set in real places and because it is everyone can identify with it and the very real characters that Roux has peopled this with.
Take Jake…{and a few characters wish you would} Jake is an average guy with above average talent…he is a singer songwriter whose main failing appears to be intense loyalty to his mates and a healthy though misdirected libido.
That loyalty and his over developed sense of insecurity sees him thrown out of his marriage and his house in short order.
He, like many of his friends isn’t quite certain exactly how that happened, but it did and he makes the best of it…in the worst possible way.
He shacks up for want of a better word with 19 year old Jade. She of the blood pressure raising body. Despite the age difference Jake is happy, kind of.…Jade is pregnant with his baby…kind of.
He gets caught up with another groupie..sort of.
He is still madly in love with his soon to be ex wife…uh-huh.
Throw into the mix his day job as a real estate agent which he loathes.
His boss…who he loathes even more.
Cathy’s {his ex’s} boyfriend Harry.
Cathy’s parents…the in-laws-from-hell.
Shake it, blend it, and what you end up with is a marvelous romp through the night spots of Hull … the lives of some marvelously quirky and memorable characters and an all together delightful, fast-paced and very different reading experience.