Topic: The Relevance of Sex In Literature in 2011." My Guest Author Michael J. Pollack 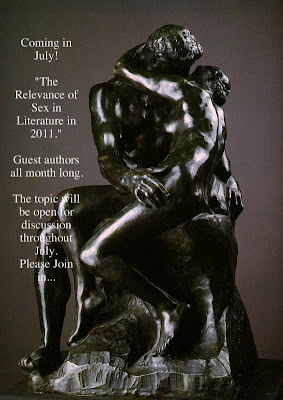 A quick introduction. I’m an American male in my early 40s, and most of what I write is for the Young Adult market. When I learned about this blog series, The Relevance of Sex in Literature in 2011, I jumped on the opportunity to offer the perspective of the creator of material designed to be consumed by teenagers.

There are unique obstacles to overcome when writing for the teen market. At my age, writing about teenagers between the sheets makes me feel like a dirty old man, a pervert acting out his fantasies on paper, righting old wrongs, and making my family feel ooky just thinking about me typing these scenes alone at night.

That was the first obstacle to overcome, and it took a long time to abandon the fear that teen intimacy, as a writing topic, was forbidden to me. The more novels I read in my genre, the more I come to understand that desire, hormonally-charged lust, and sex should not be denied the young adult reader out of some puritanical ideal. To do so is to write without honesty, and what’s the point of that?

Teen readers have sex. Those who don’t have sex constantly think about it (either how to have it or how not to have it, when to have it, and with whom, and some of them may even ask why). Now more than ever, their lives are saturated by sex in television, movies, music, magazines, websites, blogs, status updates, and tweets. To deny teen passion in fiction is to run against the grain of the media against which authors compete for teens’ attention.

We begin to think that sex is a necessary element in our writing in order to capture and hold a teen reader’s interest. We ask ourselves: wouldn’t a dash of sex be just the thing to spice this up? But how much is enough? How much is too much? How detailed can I be? How vague must I be? Do I need to obfuscate the scenes to write over the heads of thirteen-year-olds? If I do that, will eighteen-year-olds feel like they’re being babied?

And here come my favorite questions that young adult authors ask themselves: Will these scenes limit my readership? Will school libraries ban my book? Will pitchfork-wielding villagers hunt me down and torch my novels in the street? And most importantly: will parents of my readers tear me apart in online reviews for corrupting their kids?

Ridiculous notions, yes, but indicative of the depth of nuance that surrounds the decision to write sex into novels that hope to attract a teenage readership.

At the core of many of these concerns is authorial responsibility. Authors have a responsibility to write with honesty. But they also carry the responsibility of influence. Words have weight. Life imitates art. Those are but a few of the cliches that ring in an author’s head while we write. We want our books to resonate in the reader’s mind long after the final page is read, but we certainly don’t want that resonance to be in the form of a young reader acting-out as one of our characters might in hopes that the outcome may be exactly as depicted in the art. Adult readers often read to escape, and we do not expect that our own situations will be resolved with the same ease and compactness as the characters in the books we read. Yet, we also read to relate and identify, so we expect that the characters we read will encounter the same troubles we encounter in life, and their solutions may guide our own in years to come. For a teenager, that often involves dilemmas of sex and intimacy and readiness.

The differentiator, in my opinion, is respect. Writing the scenes with honesty while treating the characters and subject matter with respect takes care of both obligations: we deliver an honest story while offering responsible influence.

So, okay. We’ve matured since eight paragraphs ago. We’ve decided it makes sense not to deny ourselves the freedom to write sex in teenage novels. And we’ve decided to do this because our readers deserve the honesty, not because we wish to compete with a sex-filled premium cable television series. And we’ll further permit ourselves to do so because if we write with honesty and purpose, our craft will influence readers positively through identification and empathy rather than negatively through moral corruption.

Time for a bit of authorial intrusion, and possibly a point of disappointment. Before we go further, I want to state that my young adult novels do not contain explicit sex scenes. I know, I know. Booooo! After all I’ve said, I don’t practice what I preach. Not so! I WOULD write a teen sex scene if I thought it was relevant to any of my stories. I would do so without fear of being branded a pervert, and without fear of the FBI knocking down my door in search of child porn. The truth is: I simply don’t write novels in which explicit sex is relevant. How about implied sex? Sexual fantasy? Banter? Innuendo? Hormonally-charged lust? Sensual dreams? Sure! Of course! Those are tremendous motivators for teen character actions, as well as great vehicles for deepening the layers of my characters. I write them all into every story. But an actual sex scene has never been relevant to any of my young adult stories.

Even the sexual fantasy becomes a challenge to an author who carries the responsibility of both honesty and responsible influence. There’s a scene in one of my novels in which two characters who’ve been secretly interested in each other finally meet, finally reveal to one another their affections. Better than that, nobody’s home. They’ve got the house to themselves. And they’ve got time. But they’ve also got a problem to solve, the story’s main conflict, and time is running out. Stopping to have sex could go either way. It could solidify their bond, making them stronger together against the darkness they must face. Or they could become so completely lost in one another that they lose their opportunity for victory. Or the criticality of the conflict could fade from their minds.

The narrative perspective is with the boy, seventeen years old. With her arms wrapped around his neck, her body pressed against his, the seventeen year old girl he’s had a crush on all year holds him close and gently kisses his neck below his ear. His, umm, passion swells.

As an author, I had to think hard (stop laughing) about whether or not sex would serve this story and serve their individual character arcs. I decided in the end, although these were perfect conditions for two hormonally-charged teenagers to explore each other, that the story works much better with the characters facing their conflict, leaving sexual gratification as a part of their future’s promise (something to live and die for), not something they’d so quickly put behind them.

That said, my editor nudged me, then pushed me, then rammed me with a bulldozer to draw out that moment... from the minute the girl flings herself into his arms, through the moment they find themselves walking hand-in-hand down a dark hallway to his bedroom, right up until they mutually decide to face the story’s conflict rather than give in to what they immediately want. A romance writer, she helped me overcome the clumsiness and ham-handedness that I’m sure most male writers must break through in order to write a physically intimate scene with honesty, integrity, and responsible influence. Should I find someday that a teenage sex scene is relevant to one of my stories, I am confident that I can write it honestly, respectfully, in a way that serves the characters and the story.

So, what makes sex relevant to a story? That’s easy:

However you define relevance, sex should serve as a lens through which the reader can view a character at a deeper level. It should provide a window through which the novel’s themes can be clearly seen and understood.

Given all the young adult novels I’ve read, I have formed the belief that success lies in hitting the sweet spot (stop laughing again), in deciding how much sex truly serves the story, and deciding on what level of detailed description the author can comfortably write for their audience.

This month we’ve considered so many facets regarding the Relevance of Sex in Literature in 2011, and in this post I’ve asked you to think about using “the relevance of sex to your young adult story” as an acid test to determine whether or not your story needs sex scenes. That, in turn, offers a unique angle to the larger picture of the relevance of sex in literature in this era.

Thank you for your time, and I welcome all comments.

Please join in the discussion in the comments section below, your thoughts are most welcome.