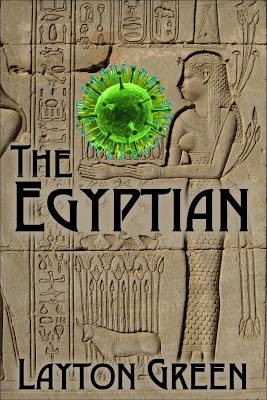 SYNOPSIS: THE EGYPTIAN: A Suspense/Thriller

At a mausoleum in Cairo's most notorious cemetery, a mercenary receives a package containing a silver test tube suspended in hydraulic stasis. An investigative reporter tracking rogue biomedical companies is terrified by the appearance of a mummified man outside her Manhattan apartment. A Bulgarian scientist who dabbles in the occult makes a startling discovery in his underground laboratory. These seemingly separate events collide when Dominic Grey and Viktor Radek, private investigators of cults, are hired by the CEO of an Egyptian biomedical firm to locate stolen research integral to the company's new life extension product. However, after witnessing the slaughter of a team of scientists by the remnants of a dangerous cult thought long abandoned, Grey and Viktor turn from pursuers to pursued. From the gleaming corridors of visionary laboratories to the cobblestone alleys of Eastern Europe to a lost oasis in the Sahara, Grey and Viktor must sift through science and myth to uncover the truth behind the Egyptian and his sinister biotech - before that truth kills them. For fans of Douglas Preston, Steve Berry, Dan Brown and the X-Files.

What have I missed? Damn this is a good read, it stands alone, yet I am now aware that another book ‘The Summoner’ exists encompassing the same pivotal character, Dominic Grey.

I had no preconceptions when I began reading “The Egyptian” and at that point had not read any of this fine authors previous work, rest assured that is about to be rectified.

I base my reviews on several very simple yet intrinsic parameters… Plotline. Characterizations. Dialogue. Research.

And the ever illusive X factor…that strange compelling thing that makes a work un-put-down-able!

So last things first…The X factor? Was it present in The Egyptian? By the truckload!

The pacing is almost breathlessly fast, and the superb writing grabs the reader by the throat and holds them in its grip until the last sentence ends. And…Then? This reader went online scrounging frantically to find more books by this author…I’m smiling ‘cause I now have a copy of “The Summoner” to look forward to.

But I digress… “The Egyptian” is fascinating on many levels; it has a psychological jolt that makes you wonder just how you would react given the opportunity to access “the Elixir of life.” Author Layton Green permits his characters to explore their own values and integrity when confronted with the reality of the factual existence of the mythical Elixir.

He doesn’t spare the characters from self-destructing by greed.

The characterizations are crafted with a clever and intelligent pen. Author Green makes you care for the central character of Dominic Grey, by making him worthy of caring about, yet not infallible by any stretch of the imagination. Grey is a mystery to everyone but himself, with a vulnerable underbelly that he shields as best he can. In this novel he harkens back to a female that I believe appears in The Summoner…his feelings and memories of her are very strong…that doesn’t mean that he isn’t attracted to Veronica, who is in search of the “Story to end all stories.” Her job as a freelance journalist has her scrambling to follow Dominic as he travels to Bulgaria on his mission to locate the “Elixir.” Enter Stephan and threats to the lives of all three of them as the nightmare investigation begins throwing mutilated bodies in their path.

The research is impeccable; cleverly utilized descriptions take the reader from the streets of Manhattan, to villages in Bulgaria, to the endless fascination of the land of Egypt.

I walked the bazaars, tasted the sand, and felt the sun scorching my limbs; such is the power of the description used by this author. That alone makes this a stand out book, yet when I factor in the believability of the plot, the beautifully drawn characters, the dialogue which is flawless…well I just keep finding more reason to give this work five stars. I love it when I find an author whose next book I can’t wait to read. Layton Green has me as a fan... hook, line and sinker.

If you love a fast paced, well written, and exciting read, you can’t go past this one. The Egyptian has become my favorite read so far in 2011.

About the Author: Layton is also the Kindle bestselling author of the suspense novel The Summoner (first in the Dominic Grey series of stand-alone novels), as well as the mystery novella Hemingway's Ghost. Please visit him at laytongreen.com.