Book review: “House of Silver Magic.” …Book One of The Magic series   By John Booth

Book Blurb
The House of Silver Magic is the first in a series about a mysterious entity called The Source and those who choose to serve and protect it.

The Source may have been around forever, but since the 1920’s it has resided in a house in the suburb of a small town outside London. Gold, Silver and precious stones are imbued with magic power if they spend any time near it. In the hands of a human, such objects grant them power to do what they really want. Some use that power for good and some for evil.

Mandy, William and Jenny aren’t as human as they think they are. When their father dies in an apparent accident, they find the world has turned against them. Hounded from their home by the courts and bailiffs, they find themselves in a strange house that shows every sign of being haunted.

Worse, the enemies of The Source are gathering. Those who seek its power for nothing more that personal gain and the control over others its power can bring.

How can a bunch of kids save The Source from adults who kill for pleasure and without conscience?

The House of Silver Magic will be on sale in all eBook formats and paperback from the 11th of November.

Book review: “House of Silver Magic.” …Book One of The Magic series   By John Booth 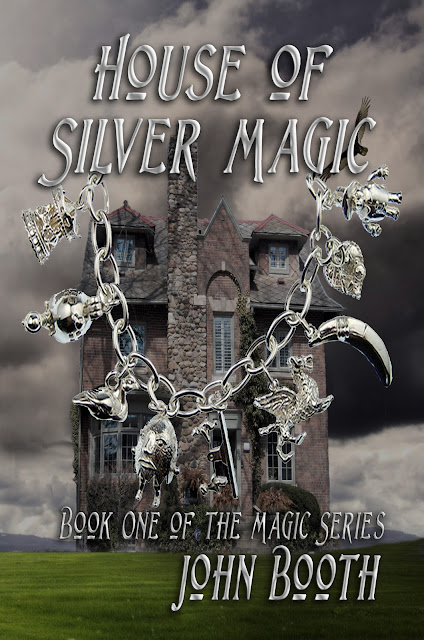 John Booth has been a favorite author of mine for a while now, and I am so delighted to have the opportunity to review his soon to be released “House Of Silver Magic” the first in a brand new Magic series.

Meet the Grange family. Mandy the eldest at fifteen, followed by William and twelve year old Jenny. With the mother Eleanor ever present to keep a watchful if disbelieving eye on her 3 children.

The relationship between the siblings is crafted with a sure knowledge of young people and their interactions.
The dialogue is marvelously accurate.

When husband and father James Grange dies in mysterious circumstance the powers that be appear to turn on the shocked and bereaved family, forcing them out of their home without a place to turn and no money.

Until their solicitor arrives with strange instructions and a cheque for .

His instructions make no sense to the family, how is it possible that they could win at auction a millionaires home for such a paltry sum. But win the house they do, and their adventure into the world of magic and mystery begins.

The three youngsters each have strange instances of seeing what can’t possibly be there.…Or can it?

Meet the Dees. The beautifully described magical protectors of the home. They are there to defend the occupants that are of “the blood’.

Evil doers intent on murdering the Grange family…carrying magic silver from the mysterious 'Source’ Mrs. Constance and her psychopathic son are the very epitome of evil, characterizations so well drawn that the reader can despise them without effort.

What follows is reading pleasure as good versus evil. With enough twists and turns to keep readers satisfied and interested.

The retaliation of the Dees against the murderous Mrs. Constance and her deranged son will have young readers satisfied that justice prevailed.

The pacing is masterful. The plot line just terrific…and the intricate weaving of these things and that x factor  all  authors crave make this a must read for not only young adults, but for all readers that remain young at heart.

I look forward with pleasure to the remainder of the series.

Highly recommended. This book would make a wonderful Christmas gift for young and old alike.