Product Description
Highland King, the sequel to Draegnstoen, continues the saga of the royal families in 5th Century Scotland and Northern England.

Doncann (nephew of Coel from Draegnstoen) is a young Pictish prince. Swept up in the politics and murderous infighting of claimants to his grandfather’s throne, he is falsely accused of murder and exiled to the north. Often fighting for his life, he is protected by the magic of women, mentored by a Celtic demigod and shown how his fate is part of the collective future of his people.

Who can unite an ancient kingdom broken apart for generations? Stand up to an invading army threatening to overrun the entire country? Learn the secret of the Stone of Destiny?
No one but the Highland King.
Book Review: Highland King by Jeff Blackmere. 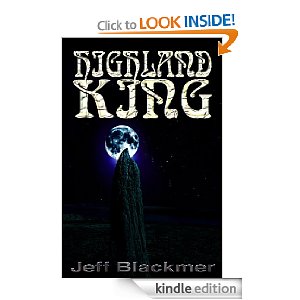 Jeff Blackmer has written a marvelous tale combining equal parts myth, legend, history and imagination  presenting  the reader with a thrilling and moving sequel to Draegnstoen.
The waring factions in the Royal families of 5th century Scotland and Northern England have torn the country apart for generations.
Greed and lust for power has murder as it’s constant companion. The country torn from within must unite as one in order to defeat the Invading army of The Dalriada.
This is more than a book of bloodied heroes and villains. It is a book of forceful and quite wonderfully graphic descriptions and you the reader are right there experiencing the fearsome sounds and scents of bloody and ferocious battle.
Doncann is the man destined to become The Highland King.
Doncann is banished to the North as a child and wrongly blamed for the death of his cousin to gain ascension to his Grandfather’s throne.
Doncann is adopted and raised as  and there he begins the long journey to gain his rightful place as the King destined to unite the lands and bring an end to bloodshed.
He is trained in the art of swordsmanship and battle techniques by the shadow goddess Scathach, Patron of The Cruithni.
Doncann doubts his heritage, but stands firm in his desire to understand the legend and accept the responsibility of the throne he was born to sit.
Author Blackmer has woven a tale of loyalty and betrayal, of deep seated hate and abiding, timeless love.
In a time when woman stood and fought alongside the men in the fierceness of battle and died a dreadful and bloody death.
The characterizations are rich, the dialogues is perfect and the names given historically accurate.
The depth of emotion of the central characters adds a warmth and dimension to this work, making it far more than just Historical Fiction, it has layers of splendid imagery, with battle scenes that are memorable and crafted well, a love story that spans a generation and dialogue that plays gently on the ear of the reader.
I enjoyed this reading experience immensely and came back to reality with a jolt and the satisfaction of having read a book that took me to a different time and a different place.
That in my view makes this an absolute must read.
Buy the book here: http://www.amazon.com/Highland-King-People-Wall-ebook/dp/B0064IT7KQ%3FSubscriptionId%3D15HRV3AZSMPK0GXTY102%26tag%3Damznf-us-tbsearchsea-20%26linkCode%3Dxm2%26camp%3D2025%26creative%3D165953%26creativeASIN%3DB0064IT7KQ
Posted by Soooz Burke at 12:35 PM