MAY MOVERS AND SHAKERS PROMOTION. 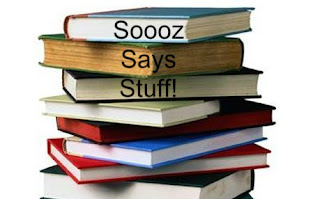 I am delighted to welcome author Helen Ducal to my May "Movers and Shakers Promotion." 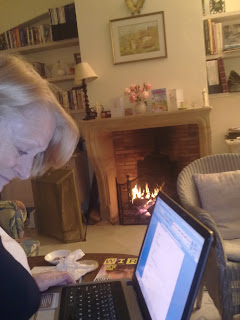 What Helen has to say about herself...


'I think my philosophy pretty much sums me up.
The only life worth living is the one you create for yourself.
I was determined to be a writer ever since being asked to leave the Brownies for chalking on the benches! Had my first business at 19, married at 20, divorced at 30, ditched the 9-5 at 40 to work as a live-in carer, working in Europe, travelling to Australia and writing in between. Got a first in Media writing at 50, moved to France, where I recharge my batteries and write and eat and sleep. But still have to return to the UK every 2 weeks to earn my rent, until I can write full time."
And what others say:
A friend once said. 'You write like Enid Blyton on speed.'
And my English teacher said. 'There is a fine line between genius and madness.'
Another friend said. ‘Why you bother to write fiction when your own life is like a cross between Mary Poppins and Madonna beats me.’

I used to read a lot of Enid Blyton but have never knowingly taken any drugs. I think my English teacher was spot on and the third friend encouraged me (unknowingly) to write my current best seller in the France, travel section on Amazon, kindle.
Helen has two marvelous books available...............

The first is a futuristic look at the choices we make. SHELF LIFE. 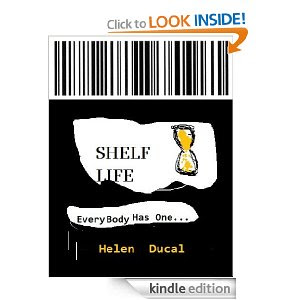 http://www.youtube.com/watch?v=8HjodYuJAxM&feature=g-upl
In 2053, research scientist Stevie Pinks discovers a barcode in a human forehead which gives an expiry date and it's no fluke. Everybody has one.

If you could choose to know your expiry date...would you?

Shelf Life is about two scientists, Stevie and Max, their relationship and their opposing views on revealing a discovery that will affect each and every one of us, even more than DNA and just as deadly as the atom.
And how often scientists find one thing when they are looking for another. e.g. X-rays, penicillin. The principle of limited sloppiness.

It’s about the human ability to repair itself. No cloning, no embryos, and for years we have been throwing it away!
It’s about the first babies to leave hospital with their own Stem Cell Repair Kits. Soon to be known simply as SCRK.

A gay couple, soul mates since nursery school, who have everything but want matching eyes.

And how, although the government’s actions can be stopped they cannot always be reversed.

It’s about one man who fiddles with his barcode and does the impossible...changes his expiry date?

Fear of the unknown

5.0 out of 5 stars JUST READ IT!,
By
Geekster - See all my reviews
This review is from: SHELF LIFE: EveryBody Has One. (Kindle Edition)
This is an absolutely cracking read. It fulfils the criteria of being both an entertaining and totally enthralling thriller, whilst at the same time having interesting and challenging things to say about current trends in science and society. The writing style is slick and at times borders on the experimental (won't ruin any surprises here) but never lapses into self-regarding 'post-modern' experiment for experiment's sake - rather the narrative techniques are hightened to increase the slickness and the drama rather than score points from self-elected literati.
Very humorous at times, but also has moments of quite disturbing darkness and the central premise (again, won't spoil) is an original and fascinating one. Importantly, whilst Shelf Life 'has things to say' the issues it engages with are never shoved in your face at the expense of the narrative: in other words, whilst Shelf Life DOES discuss ethical issues it is never worthy or sanctimonious.
Whatever your tastes in reading I can't see it dissapointing: it is an absorbing thriller; a disturbing gothic; a sharp satire; an challenging science fiction novel. Imagine George Orwell or Aldous Huxley with a sense of humor and you're heading in the right direction. With it's combination of humor and social critique it might be more appropriate to compare this novel to 18th century comic social commentators such as Jonathon Swift, Lawrence Sterne and Henry Fielding: which is not to suggest that this novel is 'old fashioned' (nothing could be further than the truth), rather that its author knows that serious points can be made more effectively if dealt with humor and that - no matter how 'literary' a novel purports to be - it should never fail to entertain. Shelf Life would appeal to readers of both Amises (Martin and Kingsley), Vabokov, Chuck Palahniuk, and Irvine Welsh as well as thriller and sf fans.
**** 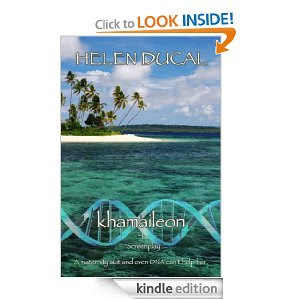 The second is KHAMAILEON.
When the 'perfect man' disappears with their newborn son Georgina has to try and prove she is the mother and even DNA can't help her!

Who wouldn’t trade 30oF in London for 30oC in Singapore? But after twelve months of dizzying glitz and glamour Georgina discovers that she has become a product of the 1980’s: Disposable.
The duffle coat to Dior, girl meets boy, scenario soon becomes an intriguing and sinister thriller.
Malcolm, the epitome of the have it all era, knows that his position and power will provide cover for the perfect crime.
Clarissa is a delicious Dallas character and is Malcolm’s little ‘sister.’
Maria is the Italian family friend, confidante and true chameleon.

Georgina has given birth to a healthy baby boy…only now the baby along with Malcolm, Clarissa, Maria and more importantly the last year of her life has disappeared.
She’s been duped. Georgina retraces her steps only to find that she was never there.
She starts to doubt her own grasp on reality and her sanity. Not being believed is the hardest part.
The situation seems impossible and even DNA cannot help. She must wait almost twenty years before science finally gives her the chance to prove her to be the person she always was.

The mother of their son.
****
Both available from: www.helenducal.com

"I feel passionate about both these titles.
For example, Shelf Life, because as I care for people in the latter years, they all say the same thing.  They only regret the things they haven’t done. So would they have lived life differently had they known their expiry date? Plus, the fact that the majority of cord blood and therefore stem cells are thrown away at birth, I find nothing short of criminal.
I was inspired to write Khamaileon by three very different women whose lives were devastated by varying degrees of manipulation and assumptions.
An English woman was released in 2003 having been wrongfully imprisoned for more than 3 years, falsely accused of the murder of her two sons. Sadly, she never fully recovered from the effects of this appalling miscarriage of justice.
An American woman, a proud mother who faced the most unusual of challenges, couldn't prove her children were her own through a simple DNA test. Finally, doctors told her she had a rare disorder, chimera. i.e. she is her own twin.
And any woman who has been duped, primarily, into producing a son and heir or two.
Finally, I would like to thank my English teacher, Mrs Kay, as she was then for setting me on this path by asking us to write an essay with the title...It makes my blood boil...
I have been simmering ever since. J"
Posted by Unknown at 9:15 AM