Updated Interview with Richard Wood author of 'The Prodigal's Foole" and creator of The Word Count Podcast.

An exciting development for Richard, the long awaited book Launch of The Prodigal's Foole takes place on Monday 31st October 2011.

I have added all the links below.


The book is now available for purchase (copy and paste a link listed below)! "A man can run from his past … but not his future. Symon Bryson lives in self-imposed exile until Monsignor DuBarry goes missing and not even the most adept of the practitioners can determine the reason for the abduction. The clues lie buried in the past amidst epic battles and horrific losses but reliving that failed mission tasks the team with new obstacles and fearsome threats. Symon must deal with his own hidden demons and confront the menace that threatens the delicate balance of power. When the darkest of all evils lures Symon into opening the door, an unsuspecting world will confront the unthinkable.

When all that stands between Heaven and Hell is magic, more than faith will be tested."

I will be in line to buy my copy. This interview with Richard was done in 2010. What a year it has been!

I like to start my interviews with a little personal information, firstly welcome, Richard Wood. 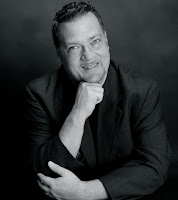 Where were you born and raised? I was born and lived the first thirty years of my life on Long Island, New York.

Where do you live now? Boston, Massachusetts

Are you currently in a relationship? Yes. After a few missteps I finally found my soul mate.

When did you recognize that you wanted to be a writer? Back in the 80’s I was an avid comic book reader. Alan Moore’s “Watchman” series, Neil Giaman’s “Sandman” series and dozens of other tales (Frank Miller, made up what’s sometimes referred to as the ‘Dark Age’ of comic books due to the dark themes and complex stories that came from that era. And I wanted to be a part of it. 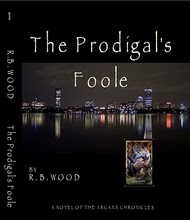 Is “The Prodigal’s Foole” your first novel? It’s the first novel I’ve completed.

What inspired you to write it? I’ve wanted to write a more adult-oriented tale about magic for a while…my partner finally said to me “Stop talking about it and write it!” So I did.

How long did it take to complete the work from word one till final draft? About a year.

Do you have an agent, or are you seeking representation? Still looking for an agent…so if you’re an agent who likes urban fantasy and you’re reading this, give me a call!

Just how important is it that the query letter and synopsis are formatted to suit the receiver? Very. I can’t emphasize enough how important it is to do your research!

You competed and completed the incredibly freeing Nanowrimo just gone, I did as well and completed it. I find working to that type of deadline brings out my creative side to a huge degree. The work you completed for Nano, share with us a little about it, and your plans for it.

Timeslip Syndicate is the story of an amoral sociopath who returns to 1920’s America from the future to build the greatest crime family in the world. It’s an ‘alternate history’ story similar to the work of Harry Turtledove or S. M. Stirling. The first draft was completed for NaNo, but there are scenes I still want to add and of course the editing-revision process. Once that’s done, we’ll see where it goes.

I read on your blog that you are setting yourself a personal challenge for January, a private nanowrimo ; I think it’s a marvelous idea. Will you be fleshing out your current work, or taking on another challenge?

The Prodigal’s Foole was always intended to be the first book of a series called the Arcana Chronicles. The second book (tentatively titled The Young Practitioner has been spinning in my head for a while. That’s what January is for. .
I also found that we share a favorite and much watched film, I was fascinated by your post about “The Godfather” In what ways did the movie inspire the writing of “The Prodigal’s Foole” TPF is about (among other things) faith and belief, not organized religion. I’ve always separated the two in my mind and the book reflects that. The machinations and brutality of the Godfather is reflected in how the Church operates.

Are you disciplined with your writing, or do you write when and as the muse strikes? Nano made me a more disciplined writer. Usually I’d fit in writing where I could in between ‘The day job,’ family etc. You have a regular Podcast contributed to by some very talented Authors. When did you get the idea for “The Word Count”? The Word Count, believe it or not, sort of just happened. I have friends (Eric Grigg and Chuck Stanley) who produce the ‘Eagles Fancast.’ They got me started on the technical side and pushed me to develop the show.

Were you surprised by the enthusiasm it generated? “Gobsmacked” is more appropriate. Five shows in and The Word Count has been downloaded nearly a thousand times already.

What plans if any do you have to develop the idea further? The New Year will bring new ideas and even more talent to the show. Once the Christmas special is out, I’ll be working on a few tweaks based on fan feedback.

Where do you see yourself personally and professionally in 2011? Personally, I’m happy where I am. I have great kids, a beautiful partner and live in a city I love. Professionally, well I expect to continue with my day job, but will hopefully add more writing contacts, and with any luck have found and agent. Actually selling a story wouldn’t be so bad either.

The publishing industry is going through a period of rapid change, do you envisage a time when Ebooks will replace paperbacks as the most purchased form of book? Oh, God I hope not. I’m a big fan of both eBook technology and the world of electronic publishing, but there is nothing I like better than to hold a physical book in my hands. 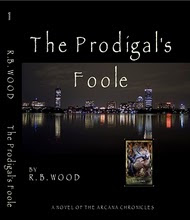 Time to plug your sites. . Web page: http://www.rbwood.com/ Podcast: ITUNES: http://itunes.apple.com/podcast/the-word-count/id392550989 DIRECT: http://thewordcount.libsyn.com/webpage Twitter. @rbwood http://twitter.com/#!/rbwood Where can folks access and read more of your work. For now, my website has snippets of novels, a few shorts I’ve written. It’s a one stop shop. Thank you for joining me here this evening, Richard.
Posted by Soooz Burke at 11:52 AM