Book Review:" Diary Of a Small Fish" By Pete Morin 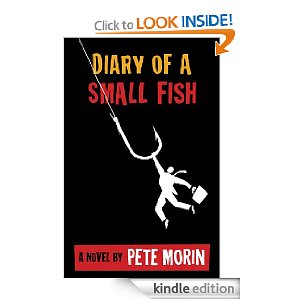 When Paul Forte is indicted by a federal grand jury, everyone suspects prosecutor Bernard (don’t call him “Bernie”) Kilroy has more on his mind than justice. Then the FBI agent in charge of Paul’s case gives him a clue to the mystery: Kilroy is bent on settling an old family score, and he’s not above breaking the law to do it.

Paul is already dealing with the death of his parents and divorce from a woman he still loves. Now, with the support of an alluring grand juror, Paul must expose the vindictive prosecutor’s own corruption before the jury renders a verdict on his Osso Buco.

Book Review: Diary Of a Small Fish by Pete Morin

Author, Peter B Morin has written an outstanding debut novel.

Irrespective of your nationality or familiarity with the laws of the United States of America, this author writes in such a way that it is clearly understood.  His professionalism is clear in every wonderful court sequence.

The character of Paul Forte is such that you just cannot help liking the guy.  His wicked humor, ability to laugh at himself and his touch of innocence in a non-innocent environment has you caring what the hell happens to the him.

Hell erupting into this guy’s life is pretty much what happens.

He has an addiction that is not fatal, but it is an addiction; albeit one that most folks seem to understand…what is it?  Golf …he has a handicap to die for on the best golf courses the U S of A has to offer.

Paul Forte is being hunted; he may be a small fish, but a sufficiently interesting fish to be subpoenaed to appear before a Grand Jury.
Assistant U.S Attorney Bernard ( don’t ever call him Bernie) Kilroy has his sights set on the coveted position of Attorney General of The United States of America…he wants exposure, he will do anything he has to do to get it.  Is he also motivated by something far less altruistic?

The author allows us to smell the set up, yet this is not a predictable story, far from it.  This fast paced and clever work takes you to the most unexpected places…

The character of Paul Forte is not one dimensional..  He is capable of deep and abiding loyalty, his heart is able to be broken, and his love is yearning to be earned.  We share with him his abiding love for his father, his relentless loyalty to friends he believes in, and his sudden and unexpected love for a woman that completes his life.

Meet Shannon, a beautiful, quirky, lovable, odd ball.  A complex woman; a character crafted with skill and a depth of understanding into unresolved guilt that is moving and right on the money.

The technical aspects of the trial are beautifully handled.

The dialogue is rich and often darkly funny.

The willingness of good people to do what is right in a bad situation is attacked, and…
I will not spoil this for you.

It is a damned fine read, fast paced, and at times intensely moving.

I look forward to reading much more from this author.

Pete Morin has been a trial attorney, a politician, a bureaucrat, a lobbyist, and a witness (voluntary and subpoenaed) to countless outrages. He combines them all in this debut novel.

Pete’s short fiction has appeared in NEEDLE, A Magazine of Noir, Words With Jam, 100 Stories for Haiti, and Words to Music. He published many of them in a collection titled Uneasy Living, available on Amazon and Smashwords.

When he is not writing crime fiction or legal mumbo jumbo, Pete plays blues guitar in Boston bars, enjoys the beach, food and wine with his wife, Elizabeth, and their two adult children, and on rare occasion, punches a fade wedge to a tight pin surrounded by sand or water. He lives in a money pit on the seacoast south of Boston, in an area once known as the Irish Riviera.

Links to where you can purchase this book.