Paragraphs of Power May Winner is..."Death Of A Legate" by Garalt Canton.

Paragraphs Of Power and the winner is...

Congratulations to Garalt Canton...his wonderful entry "Death Of A Legate" is the winner of the MAY poll.
After 72 entries, and 13 finalists it came down to a three way tie. The voting was close, however Garalt came out a clear leader. My heartfelt thanks for all the wonderful entries. 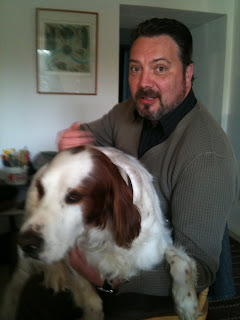 Garalt Canton began writing for independent film and television productions as part of his Media Management & Production Diploma in his native Ireland in the early 90s. By the height of the Celtic Tiger, Garalt had moved into Internet Technology, in particular developing online and electronic media for Oddbod and Julius Productions until the savings dried up. He spent five years working in Ireland's psychiatric services and then decided in 2005 to move lock, stock and barrel to the South of France.
Garalt started out self employed as an artist and web designer in Carcassonne, France but was bitten yet again by the writing bug.  He has spent since August 2009 working on his first proper novel, based on the Albigensian Crusade against the Cathar faith in 1209.  The Fifth Kingdom is a WIP and will be edited this month with an eye to publishing in the Autumn.
If I may include a personal note:  "I haven't entered any writing competitions or sent articles to magazines and so I would like to thank everyone that voted for 'Death of a Legate' I am glad so many of you enjoyed it.  A big thank you to Suzanna Burke for offering us this platform."

Read the winning entry ...
…"Death of a Legate".
OCCITANIA, Mass of St. HILAIRE, Anno Domini 1207
It is time.
Those that wish make it seem they know such things do say it is the simplest and most natural task, a gesture: to kill a man.
This man lived yet and moved. He crawled in the mud though the meat under his skull could be seen and the blood soaked each shoulder crimson. The cutter cursed his luck that a dying man might see his face, it was a dark thing. He slid and tumbled down the muddy slope, twisting his ankle in the fall. The victim's attire, now soiled and bloody, still held the cut of their quality. It was the finest wool from the mountains near Rome; such wool that gave a kiss to the skin and hung lightly even in the rain.
The cutter paused a moment in his essay to catch the victim. It was sure this man soon would be dead but that a Legate of Rome might spy him afore he brought the mace down again brought a shiver to his spine.
The Legate did not cry out or groan but hissed air and spittle through his teeth as he continued his crawl. It did not seem to be the movement of a man, not even that of a trapped boar but, from the puss and gory head, down the spine to the strangely dangling and impotent feet, this Papal Legate slithered to the river as a serpent might.
A strange thing to see for the movement was odd and angled, mechanical as a device.
When, at last, the Legate's limbs stiffened into smaller and smaller efforts, the cutter limped to his side and brought the lead mace down with all his might.
“It is time,” the cutter whispered to the river.
Posted by Soooz Burke at 10:45 AM