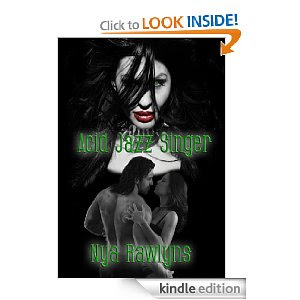 Her name was RayLee. They called her the Acid Jazz Singer, her sultry voice mesmerizing human and demon alike. She’d been running for three years from her maker and only Travis McKenzie stood between her and the darkness that had become her life.

Travis hunted the hit squads of demons and paid lip service to the Sheriff of the city. The half-blood had gifts, of the magic, shifting kind—and something more. It made him a stone cold killer and the only thing that mattered in his life was safeguarding the woman he was falling in love with.

Vladimira was the oldest of her kind, an enforcer—a gun for hire to the highest bidder. Vamp, human, demon. It didn’t matter. It was all about the job … until the stakes changed and she found a reason to care.

The singer and the protector had a history. But that history changed when a southern bigot vamp turned Travis’ friend into a travesty—neither man, nor woman … but both. Travis fell hard for the trannie known as RayLee. He was having a harder time dealing with his best friend, Ray.

Then the game changes, and Travis and Ray have to rely on an assassin with a secret agenda and uncertain loyalties.

When the demon comes to claim Ray, Travis must walk through the bowels of hell to save the only being on earth he cares about.

The problem is … who is going to save Travis from himself?

Finally a book that doesn’t resort to cliché driven characterizations. Author Nya Rawlyns has taken the vamp genre and with superb plotting and a pen dipped in an adventurous readers soul she has crafted a tapestry as bloody as it is moody.

The narrator Travis is utterly believable irrespective of the functions of his body … Travis is a cold killer, a complex and totally enjoyable character to get to know. Trust me … know him you will, his emotions are held in check, but never completely hidden. The author has given him a heart and soul, a pulse rate, needs, desires, and lusts that refuse to stay hidden.

Travis is a character that will stay in the mind of the reader, long after “The End” appears on the final page.

We care about this man…in all his forms. I will not spoil the ending for the readers . The book crosses so many genres…it is a Vamp story….yes indeed, yet one the  likes of which I haven’t had the pleasure of reading before. It is a love story..a love that is as real and complex as any you will encounter.

How does someone like Travis deal with loving a being that is both male and female? The psychological implications are so well thought out, that you the reader are captured by the passions and confusing eruption of lust, and brought to tears by the unrelenting tenderness of the love Travis has for Ray/Raylee.

The action sequences are superb, fast pacing, and relentlessly good descriptive sequences have you holding your breath in anticipation, and then sighing as you exhale…expect the unexpected, you won’t be disappointed.

All in all a superb reading experience. I am looking forward eagerly to more of the books in this brand new series. Bravo, Nya Rawlyns!
http://www.amazon.com/Acid-Singer-Hunger-Hurts-ebook/dp/B005GVOPPO/ref=sr_1_1?ie=UTF8&qid=1315296052&sr=8-1
Posted by Soooz Burke at 6:03 PM