Topic: "Censorship in Literature; should it be ' Imposed upon the writer?" OR Self imposed?" My guest Author Jessica Degarmo.n 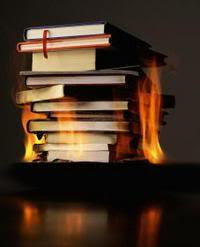 Topic: "Censorship in Literature, should it be imposed upon the writer? OR Self imposed?"

This topic is one that I’m spending more and more time lately considering.

Really, the whole topic stems from a rather disturbing series of articles
and news videos I’ve seen lately involving a couple who wrote some books
on child discipline. Although I haven’t read the books, the articles I did
read said that the books suggested the only way to raise a “good” child in
the name of the Lord was to beat it to the point that pain was inflicted.
And to use a switch to make sure.

Apparently, there are some people out there who believe everything they
read, and this whole media story culminated with a couple who have been
charged with beating their  young daughter to death in the name of God.
It’s appalling, shocking. Sickening.

Books can be wonderful things. They transport us to places we’d never get
to see. They allow us a little escapism indulgence. They teach us and help
us to grow. But when a book tells its reader to beat little defenseless
children, I draw the line.  I cannot imagine reading a book of that nature
and believing enough to try it.

Authors have a responsibility to their audiences. I understand all about
free speech and freedom of the presses, but what about our basic rights
and freedoms? The right to live? The right to exist in a pain-free
fashion, raised by love instead of violence? How can an author sleep at
night when he or she encourages such brutality, in the name of God or not?
How can an author in all good conscious say, “Beat your kid. It’s what God
intended”? God is kind. God is good. God would not condone the senseless
beating of one of His Children.

I guess what I’m trying to say is this: Authors are wonderfully creative
people who paint vivid pictures with words and enlighten the general
public. Writers are storytellers, crafters of alternate realities and
lively discussions. But authors have a responsibility to remember what
their readers may think. Some may argue that this mere thought is
censorship, and I suppose it is, but really, what choice do we have? If
there are those out there who think that just because they read that it’s
acceptable, or even commendable to beat children with switches when
they’ve done nothing more than be children, don’t we have a responsibilty
to not add fuel to the fire? Don’t we have to publish carefully,
responsibly, so that we don’t cause needless suffering?

Now I’m not saying, per se, that the book was the sole reason those people
allegedly beat their children. The media tied a nice neat bow on the story
and insinuated enough so I don’t have to. But in my humble opinion, it was
highy irresponsible to publish such material, knowing that there are those
out there who would try it. I’m certain the writers of that book believe
in their words, but that doesn’t make them right. And it doesn’t make
anyone right who reads that material and thinks that their children would
benefit from a beating.

You can disagree with me all you want, and you can argue that censorship
will ruin writing and publishing, but there has to be a line. I know we
all have our own beliefs, but I cannot imagine why anyone would think that
beating a child with a switch is what any God would want us to do. Let’s
reverse the situation. Put yourself in that child’s shoes. Does he or she
know that Mommy and Daddy read a book that told them this was ok? No, that
child is simply terrified, hurt and confused. Would you want to be beaten
with a switch?

Obviously, there is a reader responsibility as well. Readers cannot
believe everything they read. They have to understand the difference
between fact and fiction, between opinion and rule. But readers can’t
always make that distinction, and it’s up to us as writers to guide them.
And it’s up to publishers/presses to ensure that objectionable material
doesn’t go mainstream.

Consider the way that TV shows were once moderated. Even mild swear words
were frowned upon. If I’m not mistaken, those were simpler times when we
didn’t have such awful violence on TV, and crime rates were lower. It
seems as though anything goes now, and the lack of sensorship is resulting
in increases in crime and horrendous misdeeds; indeed, a downward trend in
morals and kindness.

The bottom line, in my humble opinion, is that children are our most
valuable natural resource. Protect them. Love them. Give them every chance
to grow up into healthy, productive adults. We have a responsiblity to
them to protect them from violence, religiously-sanctioned or not. We need
to make sure that there are no more senseless deaths due to modern
literature. We have a responsibility to carefully consider what we read
and follow the Golden Rule.

And for everyone’s sake, please don’t believe everything you read.


Please join in the discussion...your views on the topic are most welcome.