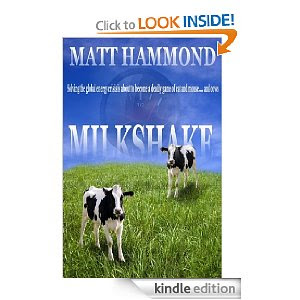 A thirty year-old technological discovery threatens his own future and jeopardises the lives of millions of others as David discovers that starting a new life is about to become a deadly game of cat and mouse... and, somewhat surprisingly, cows.

Modifying milk so that ethanol can be processed from it could be the solution to an impending global oil crisis, but drinking it will kill you.

Can the truth be uncovered before an entire country is sacrificed to satisfy the world's demand for bio-fuel?
BOOK REVIEW: MILKSHAKE by MATT HAMMOND.
Author Matt Hammond has woven intricate plot threads together to form a fast-paced and exciting thriller.

From the opening paragraph,  the reader is swept into a seemingly unconnected series of events that leave you turning the pages anxiously awaiting the next connection.

Meet David Turner…leaving the United Kingdom and seeking a safer world with his wife Katherine. The intended journey to New Zealand via Singapore begins with a murder and incorporates alleged credit card fraud.

David Turner expects to be arrested at any time, he after all was witness to a murder.

What happens is cleverly directed, and easy to visualize. A group supposedly from British Law enforcement convinces Turner that he has been used as a mule to transport a credit card with access to Millions of pounds sterling into New Zealand.

David Turner is more than a little suspicious at the high level of expertise used in this fraud, he smells a set up, yet has no option but to cooperate with these officials. Placing himself and his wife Katherine in danger at every turn.

The plot twists are so well introduced that the reader barely catches their breath and nods knowingly thinking they have figured it all out…only to be slammed into another turn.

Matt Hammond has that x factor, the one that every writer of crime and thriller fiction wishes they had. He has that innate sense of timing others envy, knowing when to lure you in and keep you firmly hooked.

The author shows a great feel for the Maori people of New Zealand and the dialogue and customs of ‘the land of the long white cloud’.

There are heroes worthy of the term, and villains easily despised, yet they are not caricatures, each character is three dimensional and evolved very nicely by this author.

I will not spoil the storyline for you, it’s far too good to do that.

The greed of other men from powerful nations is such that the entire future of New Zealand and its people is under  threat.

Bio-fuel? What country could clearly say that they have no interest in finding a non ending supply?

However…it’s the lengths that individuals will go too, the extremes too dreadful to contemplate that make this book a terrific page turner…If I may quote from the book:

“If my people ever find the truth of what’s going on here, believe me it's easier for a bee to annoy an eagle than it is for an eagle to annoy a bee.”

I am delighted to recommend this book .
Buy at Amazon.com here:http://www.amazon.com/s/ref=amzn_ie8_search?ie=UTF8&tag=amznf-us-tbsearchsea-20&url=search-alias%3Daps&field-keywords=Milkshake%20by%20Matt%20Hammond

By on Smashwords here: https://www.smashwords.com/books/view/95331
Posted by Soooz Burke at 9:17 AM