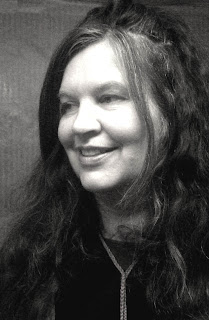 Meet Author Kate Rigby:
Kate Rigby has been writing for over thirty years. She realized her unhip credentials were mounting so decided to write about it.

However she's not completely unhip. Her punk novel, Fall Of The Flamingo Circus was published by Allison & Busby (1990) and by Villard (American hardback 1990). Skrev Press published her novels Seaview Terrace (2003) Sucka! (2004) and Break Point (2006) and other shorter work has appeared in Skrev's avant garde magazine Texts' Bones including a version of her satirical novella Lost The Plot.
Thalidomide Kid was published by Bewrite Books (2007).
She has had other short stories published and shortlisted including Hard Workers and Headboards, first published in The Diva Book of Short Stories and now published as part of the Dancing In The Dark erotic anthology (Pfoxmoor 2011).

She also received a Southern Arts bursary for her novel Where A Shadow Played. 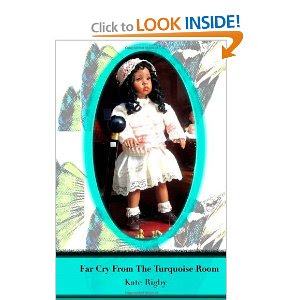 My BOOK REVIEW of FAR CRY FROM THE TURQUOISE ROOM.
The world around me disappeared when I began reading this marvelous work.
The character voice touched a chord and I was lost for the duration of the novel to the thoughts and feelings of Leila as she grew and learned that some prices must be paid in life.
Then I meet Hassan...a man who wanted everything in his well ordered life to remain the same.

A man who struggles with grief at the tragic death of a child, and alienates his other daughter in the process.
Leila is caught in the grief ... not knowing how to express her own loss or let her parents see that she is also dealing with a enormous change in the family dynamic. She is not her sister. Why can’t they see her? Her abandonment is complete.
Her confusion and fear escalate within the house, and the announcement of another child being conceived cements her thoughts into actions and she runs away.
The author has crafted a story with warmth, tenderness and anger. This reader caught herself nodding in agreement with the feelings that Kate Rigby’s clever pen had drawn.
Hassan is a proud man. He wants everything for his family, he demands much and expects that his word will be heeded. He fails to notice the desolation his own grief is causing.

I wanted to alternatively shake him and hold him close. His suffering reduced me to tears.
The reader is a participant in this work. You can not read it and not be caught up emotionally with the principal characters.
Make no mistakes, this is a far cry from being a simple coming of age novel.
It is a novel of growth.
It is a novel of the human experience.
It is a novel not to be missed.
Posted by Unknown at 5:01 PM