Interview with Michael Davidson aka 'herocious' author of Austin Nights.

Please join me as I interview Michael Davidson aka herocious author of "Austin Nights" My review of Austin Nights follows the interview. 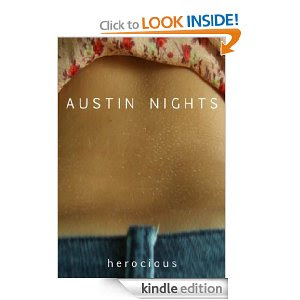 
Your bio says you were born in Miami … to a Colombian mother and an Anglo father; a blended heritage. Was this the best of two worlds growing up ... or a difficult balancing act?

Being a mix means being fed two languages, two lands, two identities. It follows that no language is completely mine, no land is home, my sense of identity isn’t a virulent thing. Having said that, there was/is no balancing involved, and I’m not saying it’s this way for every bicultural person, but for me it was/is a tremendous benefit. It sets me outside the box. I like it here.

Do your immediate surroundings help or distract you in the creation of a piece of work?

My immediate surroundings are my stomping ground. When I write I start with what’s closest to me and distance myself gradually. I live in the present, with my eyes wide open, and it’s through this that I come to understand the past and start to consider the future.

Austin, Texas is as much a hero in Austin Nights as are Michael, Bridget,  the ‘leprechaun elf’ and ‘crazy girl in 229’. Did you live in Austin? If so for how long?

Austin has been our home for a little over 2 years now. Although we yearn for the ocean and its salts, we appreciate the energy in this place.

There’s a lot in it that I lived through. Many of the sections were written either in real time, that is to say, as the thing was happening, like taking Honeyed Cat to the cracked-out veterinarian and learning about her dire condition, while other sections came to me after the fact and were lightly kneaded (using fiction) into the semblance of a plot.

You have invested yourself on a highly personal level in this work, people will no doubt say ‘Well of course he has.” Yet you took it to the next level by writing from both the male and female POV. I was moved by the insights and the inner knowledge portrayed by the POV of Bridget; how difficult was it to write from a female partner’s perspective?

First of all, thanks for asking this. Some people have asked me if Bridget wrote her parts and I wrote mine, others have even assumed Bridget wrote her parts. Writing in Bridget’s voice was more refreshing than difficult. More like a break from being Michael, this person I’ve been for 32 years now. Her parts were what kept me going and, in turn, kept the narrative going. I never knew where they would throw me next. Bridget’s eyes are really big almond mirrors. Relationships are existential.

Where did the pen name herocious come from?

Eleventh grade found me back in “The States” after four years living in Colombia. My English was some strange hybrid that had the potential to fascinate linguists. I pronounced things incorrectly. I transliterated phrases. I invented words. One of my most dear neologisms is herocious. I used it to describe a hard and cold wind that buffeted me one Houston night. One friend called me out on it the next day at school lunch. He said, “Wait, what? Herocious isn’t a word. You mean ferocious, or maybe atrocious?” And I said, “No, herocious is a word.” And he said, “I really don’t think it is, man.” And I said, “I’m going to check it up in the library.” And he said, “You do that.” Herocious wasn’t anywhere in the library. Now it is though.

The content of Austin Nights is intensely visual, much like a book of snapshots of moments in time. Is this a style you have coveted or a flow that happens whenever you write?

More a flow that came as a result of an inner urgency. My eyes wrote it. Bridget’s eyes wrote it. Honeyed Cat’s eyes wrote. Eyes wrote it. Which explains the visual aspect. I covet block narratives. Writers like Bernhard, Saramago, Sebald, writers I imagine pacing and thinking hard and manically. In fact, my next novel is a block of prose. There are seamless transitions in it, kind of like Mr. Show.

How long did Austin Nights take you to complete from first word to publication?

Austin Nights is your first novel. Sunset Cliffs is also available, and Inside 553 is the latest … Please share with my readers a little about each title.

Inside 553 holds a special place in my heart since it’s my first published story. In 2002, Literary Potpourri (now defunct) decided to print it in its Winter issue. It’s a short story I wrote as an undergrad in Chicago. I remember being alone in the basement of the Regenstein library, writing on my mean-looking laptop, when I sensed some commotion and surfaced to the ground floor and ran into someone who told me a gunshot had been fired in the fifth floor mens bathroom. “What?” I asked. It turns out a graduate student had put an end to his life. Immediately my feet ran up to the fifth floor, probably guided by my rubber neck. Things had been cordoned off. Immediately my feet ran back down to the basement, and my hands started a new Word doc. I wrote the short story in one sitting. I placed myself in the grad student’s shoes, put myself inside that bathroom, saw his reflection in the mirror. It was morbid, but it was meant to give context, albeit a fictional one. I needed a title, so I ran back up to the fifth floor. Still the bathroom was cordoned off, but I saw the number on it: 553.

Sunset Cliffs is another short story. Outsider Ink (now defunct) published it. The story came to me when I was living in San Diego, more specifically, Ocean Beach. My job title was “ball picker,” meaning I worked on a golf range, picking up balls in a caged truck with a radio. After work I would shower and invest my tip money in 24 ounces of Steel Reserve and stroll to Sunset Cliffs, which is a jagged family of shale cliffs hanging over the Pacific. On my walk down the hill I’d always pass a bum who wore a neon green cap. In the library I smelled him. Sunset Cliffs, the story, placed this bum in the center of an existential mystery. Those Ocean Beach days were beautiful and sad. It was the first time I felt excluded from the houses surrounded by pristine lawns and filled with families and dogs and the sounds of cooking. I was far away from where I grew up. I was a loner. I doubted if I’d ever find stability.

Austin Nights is my first novel to be read by someone other than me and maybe one other person. It started with the first sentence, “Today is April 1st, and I just finished recording a 4:01 video to celebrate the moment.” That sentence came out of me, left me forever, when I was sitting inside a Chevy in Hollywood, Florida. Bridget was getting an iced latte inside a Barnes and Noble (now defunct) and our home was packed in the bed, jammed in there, litter box and all. We were moving to Austin, to a place we had never seen. It was an interstitial moment. Everything was unsettled. Still no sense of direction. Why do I cry when I write?

When you write is it planned and carefully structured, or taken as the muse moves you?

Taken as the muse moves me. Always.

How did you feel when Austin Nights was released?

Happy, bland, unusual, hoppy. I think Bridget felt like it’s release was a milestone, seminal. Her eyes welled up a tiny bit. From her I knew I should feel a certain way. I’ll always remember her face when it happened.

What’s next for you as an author?

C R A S S I T U D E (tentatively titled) is my next novel. It runs the same length as Austin Nights. It’s about a loner in Chicago named Ernest Pipe. One solid block of prose.

Where do you see yourself a year from now, both location wise and as an author?


MY BOOK REVIEW OF AUSTIN NIGHTS.
I began reading Austin Nights to prepare for an interview with its author ‘herocious’ aka Michael Davidson. It is my usual procedure when attempting to find questions to ask that will be interesting to my readers.
I lost track of why I was reading this book at all; so caught up in the prose that crackled in my head like sparklers on the 4th of July.
Every attempt to pull myself back from the abyss of self involvement failed. Michael Davidson dragged me uncomplaining into his beautifully crafted jigsaw puzzle of a book.
Can I liken this work to anything else I have read? No ... not really. Although at times the shimmering image of Jack Kerouac managed to invade, he was overhauled and superseded by this new  and vital presence in the ranks of writing excellence.
Superlatives have been tossed around in the preceding reviews, all of them are true, yet none of them touch the bleeding vein of talent that author Michael Davidson has exposed to an audience hungry for ... what exactly? I can’t find a word...but I can state unequivocally that my hunger has been appeased and my taste buds are ready for more by this author.
Amazon link to purchase Austin Nights