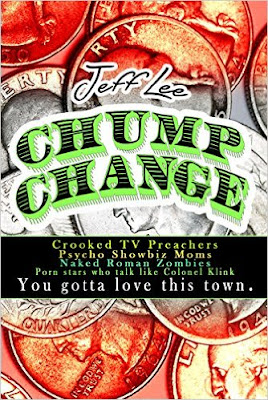 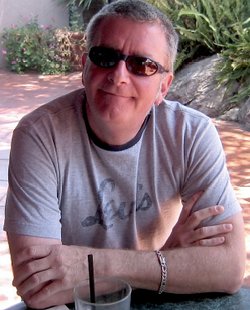 For more than thirty years he has been a copywriter and creative director for some of the advertising industry's most recognizable agencies, winning numerous awards for his creativity. None of those ad agencies are still in business, but Jeff appears to have a solid alibi.

Trained as a cook in the Army, he still enjoys being creative in the kitchen and admits that few things in life compare with the thrill of discovering you have just given a nasty case of food poisoning to 140 heavily armed men.

Jeff lives about halfway between Los Angeles and Santa Barbara, in a house he shares with his two sons and a cat that's part golden retriever.
My Review.

Big Dog Recoveries…that is the name of the Repo-firm operated by three very strange, diverse, and seriously lovable characters. They are so well depicted, and so intensely visual, they become an image in your mind. I  initially met these three whackos a few years back when I read the first book in the Adventure’s in La-La Land series: ‘The Ladies Temperance Club’s Farewell Tour.’

It only took a brief moment for me to have them flash back into my head. Let me introduce you.

Meet Fish ‘Fishbein’ A quick on the uptake, finds humor in the worst of situations, lawyer, Repo man and Bounty Hunter. Fish is the fastest wisecracker in town, and a damned fine friend to anyone in need.

His buddies in the business, are, ‘Kevin’ ah!—yes, Kevin. Kevin is cool. Kevin has a daily return ticket to the 1970’s. His mind still lives there. They are on speaking terms. I was a teenager in the 1970’s, they were my era, so Kevin for me is just such a damned comfortable fit.

Then we have ‘Einstein’. Not used in a derogatory fashion. A seriously bright, and loyal individual, who helps translate to and from Kevin frequently. The dialogue exchanges between Einstein and Kevin are priceless. Einstein and Fish have taken on being Co-Parents of a sort, attempting, not always successfully, to keep Kevin safe-- and present in the current decade whenever possible.

Okay, then there are the bad guys. It would take forever to do justice to them all. What, between, the ex-lawyer, now turned Producer- Director, aka ‘Arnie Babe.
Arnie is attempting to convince Fish to be TV’s latest reality star in a series entitled “Fish … Bounty Hunter to the Stars.”

His Wife…Mrs.TV Evangelist … Janelle. She is a totally crazy, violent, obsessed, just plain bad female. I enjoyed despising her. This paragon is mother to an increasingly obese 4 year old; a four-year-old who she is attempting to organize breast implants for, so she is more likely to win ‘The Toddler Pageant’ circuses. Like I said, Janelle is nasty … and certifiable.

Janelle's less than charming Brother, The Parking Czar who does a reverse Robin Hood on the unsuspecting folks of L.A.

Mix them together, add doses of the Mafia, bad guys masquerading as good guys, stolen loot and multiple murders … set them in a great location, with a rollicking, fast-paced plot, and you get a marvelously funny and utterly delightful read.

The journey is a delight; author Jeff Lee has drawn each and every character with an artist's eye for detail, dialogue, and clever characterizations. His observations of people are acerbic and acutely accurate.

What pleases me even more with Author Lee's work is that the plot is carefully drawn with seeming ease, comedic writing is hard to maintain, the timing has to be perfect and seemingly effortless... yet it it is one of the most difficult genres to write well.

The author creates mood and characterizes so wonderfully well, I found myself still laughing long after I’d read the last page.

I recommend this book, to anyone who enjoys feeling good about life