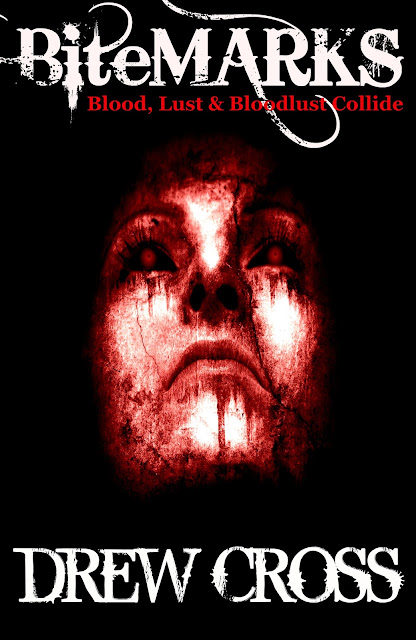 Genre: Psychological Thriller
Author: Drew Cross
Publisher: Night Publishing
Release Date: April 13th 2011
Available on: TBA
I intended reading Bite Marks over a couple of days. I intended doing other things between reads.
My intentions didn’t stand a chance once I began reading.
Nottingham: A city alive with recognizable humanity, and it’s opposite side, in all its forms. A city brought to flawed life under the clever pen of Author Drew Cross. I have never visited Nottingham, yet I will recognize the place if I do. Such is the measure of this author’s ability to transport you to the time and place peopled by his richly drawn characters.
Author Drew Cross has a wonderful writer’s voice, it teases you, calms you, makes you angry and makes you laugh…all the while allowing you to see the streets and sleazy bars, smell the odor of  despair, taste the toxicity of a city in fear, taste the blood.
Yet all is not dark, this author allows the glimpses of the other reality to shimmer and glide through this story, cleverly juxtaposing the gross underbelly of life with the utter beauty it also encompasses.
Cross’s style is uniquely his own, the characterizations are richly woven into the tapestry of a background that alternates the warmth of color with bitter, cold, darkness. Cleverly blended with gentle night breezes that carry with them the terrified screams of the latest victim of a human with deadly intent that stalks the dark alleys, seeking in his damaged mind a perverted sense of justice.
This is not a ‘Vampire’ story; don’t go looking for Werewolves in this book.
The fetishes and private lives of the central characters set them apart, yet add to their reality. The people are real and flawed, you care about them, you recognize their imperfections.
The central character of Probationary Constable Shane Marks…a cop who has a fetish for dressing Goth and tasting blood; makes him all the more intriguing as he battles his own dark memories.
Drawn into investigating the murders of hookers left exposed by the world they exist in. Conducting investigations outside his jurisdiction he utilizes the private knowledge he possesses to seek out the killer.
The killer he seeks is complex. A murderer living only to fulfill his sick and tragic need for revenge: seeking retribution for a childhood destroyed by violence and indifference. Keeping alive a generational cycle of pain received and inflicted.
The attitudes of some of the cops are sadly and clearly defined with these words I’ll paraphrase “What’s the difference between cutting an onion and cutting a whore?”
“The onion makes you cry!”
That is the pervasive attitude of a police presence jaundiced by the very city they guard. Exhausted by the people they have sworn to protect. Cops that have seen too much and can’t escape the knowledge that nothing they do will really make a difference.
Author Cross’s central character Shane Marks is not like some of the others, he cares, yet he manages to maintain his distance, he seeks isolation and privacy to enable him to cope with demons of his own.
He is drawn to help these people, at times against his instincts. His anger at the world and his memories of the inhumanity man is capable of inflicting on souls perceived to be weaker than themselves serve to make him a dangerous adversary. It simply doesn’t do to make Shane Marks angry.
We are guided by the Author to Shane’s darker nature as his personal needs and torments place him right in the midst of the investigation. His career on the line if his fetishes become known.
The secondary characters are finely honed. Each of them necessary. The writing has no superfluous words, it is a beautifully crafted work.
This book evoked many emotions in this reader, ultimately it made me care about the damaged characters, the central figure of Shane in all his complexities is an everyman … anyone who has ever suffered the human emotions of guilt, love and pain will recognize themselves at some level in this incredibly rich and visual characterization.
The book reads almost like a biography, that is the mark of a very fine author.
Take heed of the Author’s name…Drew Cross. I feel we will be hearing it…and often.
Author Biography:
Drew Cross is a married father of two from Nottingham, England. A former model and ex-police officer (but sadly never a model police officer!), he now masquerades as a financial adviser and trainer for a large UK retail bank.
He has a keen interest in Eastern philosophy, heavy metal music and Goth subculture; and when he's not toddler-wrangling, Weimaraner wrestling and talking about himself in the third person, Drew likes to practice martial arts, cook South East Asian cuisine, and meditate.