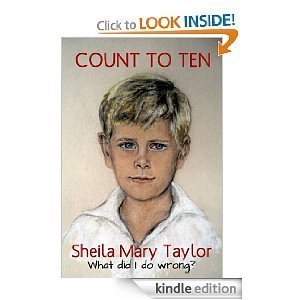 Book Review: "Count to Ten" Sheila Mary Taylor.
Non-Fiction.
No parent can be prepared for the news that their child has cancer.
The author of this work is no exception; Sheila Mary Taylor recounts the days and nights months and years of disbelief and despair as their eighteen-year-old son Andrew faces a nightmare that no teenager should be expected to deal with. The moments of elation at receiving good news; then plummeting back into the darkness of despair when things went badly wrong.
Andrew underwent major surgery at the tender age of eighteen, told beforehand that their existed a possibility that he may have to have his right leg amputated.
How does a healthy sports minded eighteen-year-old boy deal with such a thing? Andrew dealt with it by facing it head on, he asked questions and sought explanations of the doctors that were treating him. He needed to know all the details, no holds barred...that and the love he was surrounded with spurred him on through the horror of Chemotherapy and the years of almost unrelenting pain.
“I have counted your toes, and there are ten” that was the note scribbled on the back of his business card and left by Andrew’s father on his pillow after he had undergone major surgery to save his live by removing cancerous bone from his leg.
Andrew was to undergo many such operations over the ensuing years, and his mother the author of this work lived and breathed every moment with him.
His parents, siblings and friends each handled the situation in different ways, but above all else they handled it with unstinting love and support.
This book is a journey into courage in all its guises, it is written with love and understanding yet it’s not a plea for pity. It is at times terribly sad, yet written in such a way that the reader’s spirit is uplifted.
The dreadful pain that Andrew bore so well, and the love that surrounded him are all clear to see.
Author Sheila Mary Taylor re-lives the nightmare of preparing for loss although no-one really can. She is effusive in her praise for the marvelous dedication of the team of distinguished doctors that quite literally saved Andrew’s life and his leg.
Her delight and pride in her son fairly leaps off the page and you smile with her at every small triumph, and rejoice with her when life altering surgery at last succeeds in giving Andrew as close to a normal life as anyone could wish.
An uplifting and emotionally charged book.  Highly recommended.