Riding The Storms a short story by Zelda Jones. Paragraphs Of Power June 2014.

I received only one entry this month...my thanks to Zelda Jones. I am delighted to publish the following story for my followers to read, it's such a shame that Zelda didn't have the opportunity to have her work judged by comparison to other entries. It is a worthwhile piece and I feel she would have done extremely well.

Zelda has been invited to contribute more of her short stories as she doesn't currently have a published work for me to promote. I look forward to reading and presenting them. 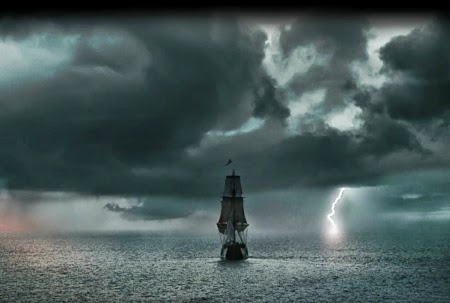 Riding The Storms. By Zelda Jones

She struggled awake from a nightmare. Gigantic ladybugs had been whirring around and attacking her. She woke with screams stuck in her throat. And then she heard it. Her dad; screaming and yelling at her mother, snarling curses at her; throwing things, breaking things, slamming doors so hard, it sounded like rapidly fired gun shots. She didn't even hear her mother whimpering. She imagined her mother, backed into a corner, long, slow teardrops falling silently from her terror filled eyes.

She pulled her blanket over her head; trying to muffle the sounds of the monster raging around her. She hoped her brothers and sisters were sleeping soundly.

It was as if they lived in a medieval castle. Her father; the terrifying king. Her mother and the rest of them; the lowly and underprivileged slaves.

From dawn to dusk, it was as if he had an aura around him of constant thunder clouds. At times, it would seem that the thunder clouds were receding into the background. He would seem jovial, sometimes he even seemed kind. But then some small detail would irritate him. His handsome grey eyes would suddenly turn the colour of ice; his pupils would shrink to pin pricks. His face would flush, his teeth seemed to change to mean monster fangs. The air around him seemed to crackle with electricity. And spit would fly from his mean mouth as he spewed forth his anger. If the spit landed on her, it would burn her like acid.

His Dutch accent suddenly became stronger; it seemed to add extra terror to his snarling words. It was at times like this that he reminded her of Hitler. You never knew how long his rages would last. It was just like trying to avoid a thunder and lightning storm. She and her younger siblings would often hide under their beds, or in their closets, until they knew he had worn himself out and gone to sleep.  Sometimes these hiding places were not so safe, as he would burst into their rooms, yell at them that they were selfish and ungrateful children, and how could they keep their rooms so untidy?  Then he would pick up their discarded toys and clothes, put them into garbage bags, and throw them into the backyard. Later, when he was either asleep, or at work, they would retrieve their things and neatly put them away with shaking hands.

When he was at work, or occasionally in the hospital for short stints due to his stomach ulcers ( probably caused by the stresses he put upon himself ), mother and the children would revel in the ebbing of the storm clouds. Their mother, who became less of herself in his presence, who seemed like a scared and
shivering mouse when he was around, suddenly became beautiful and spirited; funny even. They would help their mother with housework gladly, and would sometimes eat feasts of pies or fish and chips; grungy foods that their father frowned upon. Their home would be filled with sunshine.

Whenever their father returned, it would put them into a period of mourning once more. The storm clouds   would be so thick, at times the young girl felt that she couldn't breathe.

Television, playing outdoor games with her friends and siblings, reading and dreaming were her only escape. One of her favourite tv shows was Rifleman. She would daydream sometimes, imagining that she was Riflegirl; that she would wait at night until her father was fast asleep. She would creep up and shoot him dead with her rifle. Her mother and her siblings and herself would all be freed from the evil curse, there would be no more storm clouds. Life from then on would be sunshine, rainbows and dancing.

But alas, children's heartfelt dreams do not always come true. Fairy godmothers do not always arrive in time to rescue them. Over the years, her father's shackles squeezed tighter and tighter around her mother. New babies were born every other year.  The storms of her father's rages occurred several times daily.

The girl grew up, left home; battled her own inner storms. But still she worried about her mother and her youngest siblings. She did whatever she could to ease her mother's burdens. She could not understand how her mother could have stayed with this demon for all of those many many years.

She vowed that she would do better. She would never let another person's inner storms overtake her. She would be slave to no one. She would shower her own children with rainbows and bouquets of unconditional love. Even if other people accused her of being "too soft".

She strode into the future with her bags and bags of baggage. She made a promise that she would never dump her baggage on anyone else. She would do her best to deal with it herself.....